Click Here to see How to use the easy test 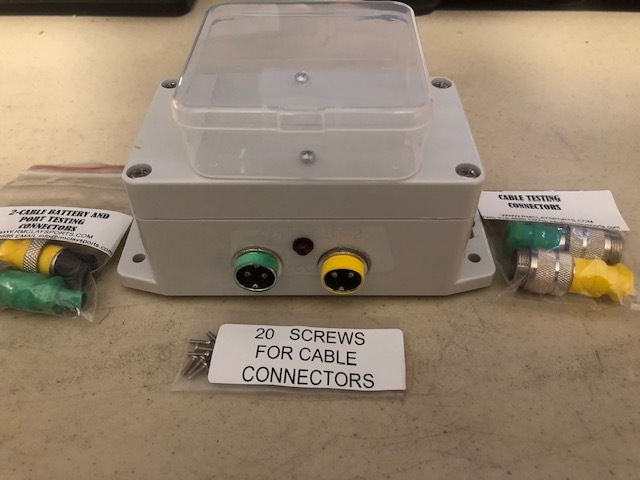 Why the Easy Test?

This all came about when I was trying to repair a customers cable. To do so you needed 2 people. 1 to hold a volt/ohm meter and one to twist the cable. Upon seeing the meter change the problem would be located and repaired by cutting out the bad section and then retesting to see if any other problems existed.

The problem again was 2 people were needed and the difficulty of holding 2 probes in the cable ends while watching the meter to see if it changed.

After deciding and talking to an Electrical Engineer I came up with a simple 1 person solution box!

I think everyone who uses this device will be extremely happy with the results. As with a meter there are some problems that need additional attention. I will discuss those in a video that will soon be available. Call Jim for details or further info. 720-319-4686

1- Velcro strip on the bottom surface and tabs on the box for mounting to a table or bench.

Customer Comments After Using The Box!

Bob Beyer with Delta Trap Club.  Bob called me and started using a few words that led me to believe I had screwed up. I said, " Whats wrong"?

Bob, " Why didn't you tell me how good Easy Test is.?" I did you just weren't listening. He then told me I should patent it and said it was BAD ASS!

Mike Runey with Tuscarora Gun Club. Mike called me and said he and his Electrician had spent 7 hours testing and repairing  30 wired cables of which 20 had problems.

Jeffery H. Shipley Sumner Sportsman Association.   .The Club was impressed with the cable tester. It works good and anybody can use it with ease!  Good job on design!

Now is the time to purchase and get those cables working perfectly!

If you fix your problem now while it is sporadic you won't have to replace the whole cable.  Once the cable becomes completely shorted or completely open you might as well throw it away! You probably won't be able to find the problem!!